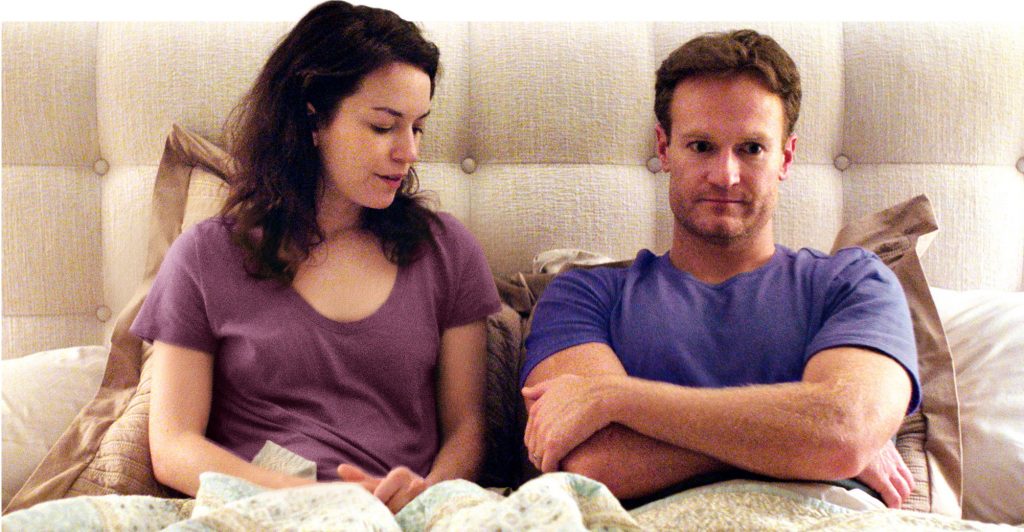 “Holly Slept Over” is the very definition of a “sex comedy,” because sex is the primary focus of all the main characters. The film’s opening scene is of friends/neighbors Noel (played by Josh Lawson) and Pete (played by Ron Livingston) barbecuing in a backyard and complaining about their sex lives. Pete warns Noel, who’s been trying to start a family with his wife, that having kids will kill a couple’s sex life. Pete tells Noel that he knows this from experience, because he and his own wife rarely have sex, ever since they’ve been raising children.

Pete confesses to Noel that because he’s had no satisfying release for his sex drive, he’s resorted to ejaculating on his wife’s breasts when she’s asleep. Pete also says that he’s been able to clean off the “evidence” without her knowing what happened. “Maybe I’m a monster,” Pete says unapologetically. “I defiled my wife. It’s the best feeling I’ve had in months.” Meanwhile, Noel’s biggest complaint about sex with his own wife is that it’s too boring.

As this conversation is taking place, Noel’s wife Audra (played by Britt Lower) and Pete’s wife Marnie (played by Erinn Hayes) are in the kitchen having their own candid talk. Audra hasn’t been able to get pregnant with Noel, and she reveals that she’s worried that she might not be able to conceive a child, ever since she miscarried an unplanned pregnancy when she was a junior in high school.

Audra also tells Marnie that she’s gotten an unexpected message from her former college roommate Holly, who contacted her out of the blue after they stopped speaking to each other 12 years ago. Holly wants to see Audra again, but Audra tells Marnie that she’s not interested in seeing Holly again. Audra says that when she and Holly were in college, their friendship ended because Holly was “too wild and free-spirited for me,” because Holly drank too much, did too many drugs, and slept around.

It isn’t long before the truth comes out about the real reason why Audra is uncomfortable with reconnecting with Holly. Audra tells Noel that she and Holly used to be lovers, but Audra describes it as an experimental fling. She insists that she hasn’t been with another woman since Holly, and she asks Noel to keep this a secret between the two of them. Noel is surprised by Audra’s revelation, because he always thought that Audra was sexually conservative.

“Holly Slept Over” uses a predictable trope that’s often seen in stories about two couples. One couple is “nice” (usually boring) and the other couple is “no filter” (usually quarrelling). It’s obvious within the first 10 minutes of the film which type of couple is which. Noel and Audra are both lawyers: He’s a tax attorney, and she’s a criminal-defense attorney. It’s not mentioned what Pete and Marnie do for a living, probably because viewers won’t care.

Another thing that’s obvious in this movie is that both couples have no privacy boundaries, because they blab sexual secrets about their spouses to someone who’s part of the other couple. It should come as no surprise then that Noel tells Pete about Audra’s affair with Holly. Pete then tells Marnie, who then tells Audra that she knows about Holly too.

It’s very easy to see that this movie was written and directed by a man, because the conversations between the two women don’t ring true and sound like they’re from a perspective of someone projecting male fantasies. For example, when Marnie and Audra talk about the affair with Holly that is no longer a secret, Marnie tells Audra that she’s impressed that Audra knows how to “dig clam.”

It’s the kind of talk that sounds like what you’d hear at a frat party instead of an authentic conversation between two adult female friends. That’s not to say that women don’t describe sex in raunchy terms. But when women talk about sex, they aren’t very likely to compare their private parts to sea creatures.

Despite the fact that three of the five main characters are women, a great deal of the movie is focused on what the husbands want and need, and the women’s wants and needs are secondary to the men’s. We know this because most of the complaining in the movie comes from the men feeling deprived by their “uptight” wives who aren’t giving them the kind of sex that they want. It didn’t occur to the filmmakers to show much of the women’s perspectives, since the women’s purpose in the movie is to react to what the men want.

For example, the filmmakers seem to want viewers to assume it’s all Marnie’s fault for losing interest in having sex with her husband Pete. However, it’s obvious within the first 10 minutes of the movie that he’s a selfish jerk in other aspects of life—he’s resentful of parental responsibilities because they take time away from when he wants to have sex—which probably has a lot to do with why his wife is turned off by him. Anyone who somewhat brags about sexually violating his wife’s body without her knowledge when she’s asleep (in other words, she didn’t consent) has some seriously unhealthy sexual issues. It tells you what you need to know about what a lousy husband he is.

By the time that Holly shows up about 30 minutes into the movie, it’s very easy to see where this story is going to go. Instead of staying at a hotel, Holly has sort of invited herself over to Noel and Audra’s place when she said she wanted to visit. And they didn’t say no. Never mind that Audra has been “estranged” from Holly for years and there’s no guarantee that their reunion will go well. Audra and Noel have let Holly stay over at their place anyway.

And when Holly arrives at their house, with her suitcase in hand, it’s around 8 a.m.—hours before Audra and Noel were expecting her. (How rude.) Holly tells a surprised Noel when he answers the door that she was so eager to get there, that she drove all night. Then, Holly asks to take a shower and a nap at their place, since she’s already there. Audra, who’s nervously taking a bath when Holly arrives, is a little put off by Holly showing up so early. But Audra and Noel clearly want Holly to be in their home, which sets the tone for the rest of her time there.

Holly’s “nap” turns into her sleeping for 11 hours. (An obvious sign that she’s hasn’t given up her partying ways.) Based on Audra’s annoyed reaction at not being able to hang out with Holly, because Holly’s been in a deep sleep, there’s more to Audra’s feelings for Holly than she’s willing to immediately reveal. When Holly wakes up, she and Audra make somewhat awkward apologies to each other for how their college relationship ended.

Audra and Holly ask each other questions about how their lives have been since college. To no one’s surprise, Holly is still single, sexually fluid, and she’s started her own marijuana edibles business called Holly’s Good & Baked. And guess what? She’s brought a gift basket of samples for all three of them to share.

At some point, Noel blurts out that he knows about Audra and Holly’s past sexual relationship. Audra seems to be horrified and embarrassed that Noel has even mentioned it. Holly then says that she’s done with having flings and only wants to have sex in “meaningful relationships.” The disappointed look on Noel’s face is all that manipulative Holly needs to start turning on the charm and flattery, because she now knows that she and Noel both have the same ulterior motive. Any adult can see what’s going to happen next in the movie.

The movie gives no indication of what any of these characters’ personal interests are besides sex. Pete complains about how being a parent has ruined his sex life, but the movie doesn’t show how he and Marnie are as parents. About 80% of what Noel and Audra talk about are topics related to their own sex life and how Holly is affecting them sexually. Even the marijuana edibles in the movie are only in the story to loosen up inhibitions for what is obviously going to happen.

The actors do the best that they can with the mediocre script that they’ve been given. As nerdy and insecure Noel, Lawson is the only actor in the cast who brings a playful sense of humor to the awkwardness and jealousy that can arise from a couple bringing a third person into their sex life. Some of his facial expressions are sure to make some viewers laugh at loud.

Livingston’s Pete character is the token crude blowhard that seems to be a required character in every sex comedy. Hayes plays Marnie as someone who can be sassy or shrewish, depending on her mood. (And it’s certainly not easy to be married to someone like Pete.)

Emmanuel portrays Holly as a lot more likable than her actions. Holly tends to do a lot selfish and irresponsible things. She’s also good at quickly figuring out what people want and using that to her advantage.

However, Holly is still a stereotypical “unicorn” (swingers’ terminology for a woman who’s open to dating couples) in movies like this—she’s pretty, available, and mostly invited into the couple’s sex life to fulfill their fantasies, but not get in the way of the couple’s relationship. She’s not there for any deeper meaning. And quite frankly, she’s a lot more disposable than she thinks she is—which is kind of like how someone could describe this movie. 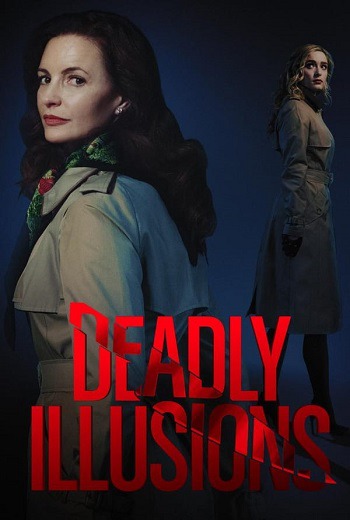 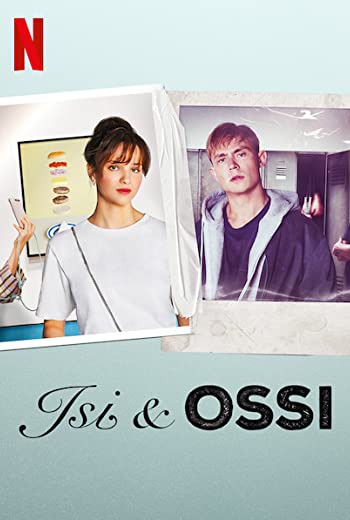