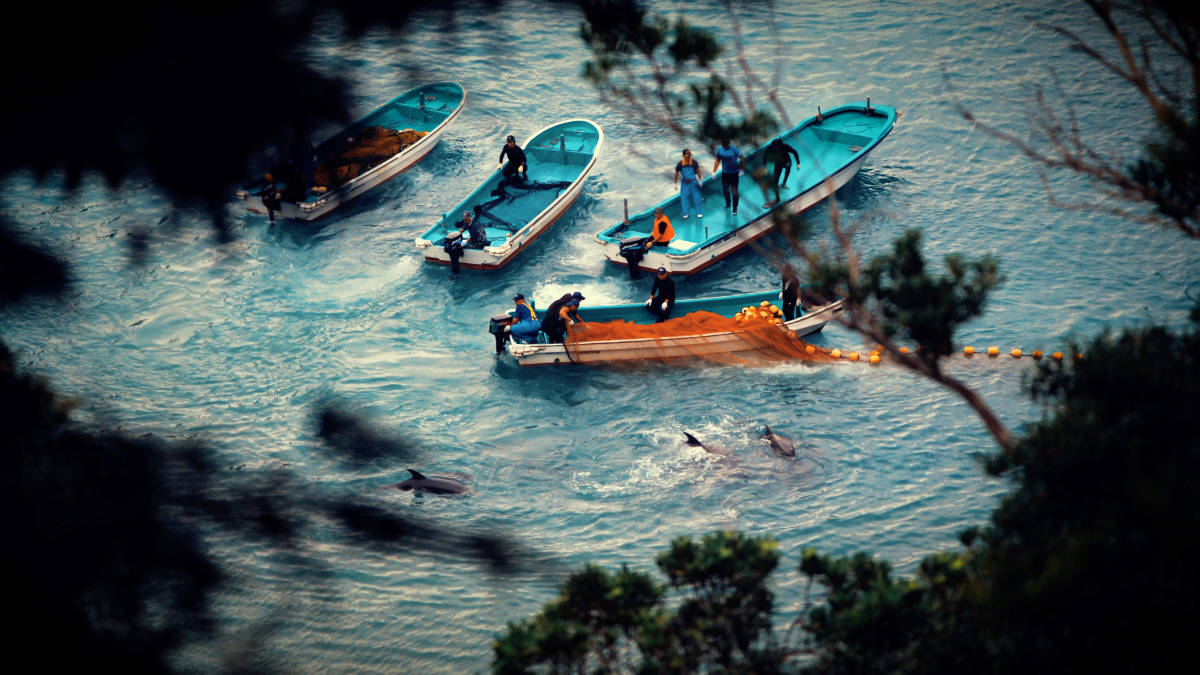 It’s unlikely that Netflix’s Seaspiracy will become the same kind of cultural tidal wave as the similarly-titled Cowspiracy, mostly for a reason that’s brought up in a roundabout way in the documentary itself — most people don’t really care about fish. They pretend to, obviously. But it’s easy to imagine a fish, with its scales and googly eyes and whatnot, as a monster of the deep, which is probably how spurious ideas like them not being able to feel pain generate traction. As it happens, they can feel pain, as well as experience a sense of curiosity and caution, and are probably well aware when one of their friends or relatives is taken from a tank and butchered right in front of them. This should all be pretty obvious to anyone who has studied fish, but to return to my previous point, I’ve never met anyone who has. This film, then, which travels all over the globe uncovering all kinds of oceanic conspiracies, has its work cut out to garner the kind of public outrage and sympathy that it’s clearly looking for, even if some of its discoveries are striking and disturbing all the same.

The director, narrator, and I suppose guide of Seaspiracy is Ali Tabrizi, who speaks at all times like he’s reading directly from a script, even in ostensibly natural conversations with other people. If there is one thing that I found consistently irritating about the film, it’s him. Impassioned and well-intentioned though he may be, there’s also an air of artificiality around everything that he does, whether that’s nervously ducking around a corner while filming a low-key tuna smuggling operation or entrapping high-ranking employees with obviously leading questions. He comes across, to be frank, like someone who is very aware of the fact they’re making a documentary film.

His reporting, though, goes to some undeniably compelling places, such as a cove in Taiji where dolphins are slaughtered en masse as a cover for the lucrative smuggling of bluefin tuna and sharks whose fins are lopped off to be the main ingredient in soups with, apparently, no nutritional value or taste. The fact that Tabrizi can’t seem to go anywhere without being aggressively shooed away and told to turn his camera off is certainly telling. There’s a lot going on, if you’ll forgive the expression, beneath the surface.

Most of it can be blamed on fishing. Seaspiracy helpfully explains the concept of bycatch, marine life accidentally caught while dredging for other species which is cast, usually dead or dying, right back into the ocean. The most compelling stretch of filmmaking involves the “dolphin-safe” label you find on tins of tuna — up to 45 dolphins can die in the capturing of just eight tuna, prompting one to wonder exactly what the Earth Island Institute, who’re responsible for the labels, considers to be safe. Their representative who speaks in the film seems to have no real idea, and the conversation comes across like a real-life version of that spoof video about the front falling off an oil tanker.

It’s difficult to argue with the profound environmental impact of extracting huge amounts of wildlife from their natural habitat, and how such a process can never be sustainable given how much it completely upends the delicate ecosystem keeping things in check. There is no such thing as sustainable fishing, either, and it’d be impossible to enforce even if there were. Since we don’t live in the water, it’s easy to push the problem aside or to improperly understand how it might impact us on land, so Seaspiracy is careful to make a point of the human cost associated with small-scale fishing operations, including the absurd mortality rate among West African canoe fisherman, and how being driven to hunt on land thanks to a crippling shortage of fish provides a direct causal link to outbreaks of Ebola in the region. Everything is connected, and nobody benefits from the association, least of all the fish.

Even the people who eat them might not be safe. It’ll be hard, of course, for anyone to see the state of Scotland’s salmon farming, or hear directly from Thai slaves forced to work at sea for six or even ten years, to blithely toss packets of fish into a supermarket trolley. But the film argues that perhaps they’re better off not doing anyway. All those healthy omega-3 fatty acids you hear so much about are often not enough to counteract the abundance of chemicals and heavy metals they also contain. This leads Seaspiracy to its only real solution, which is simply to eat less fish. I mean, sure, if you say so. But it hardly seems like enough.