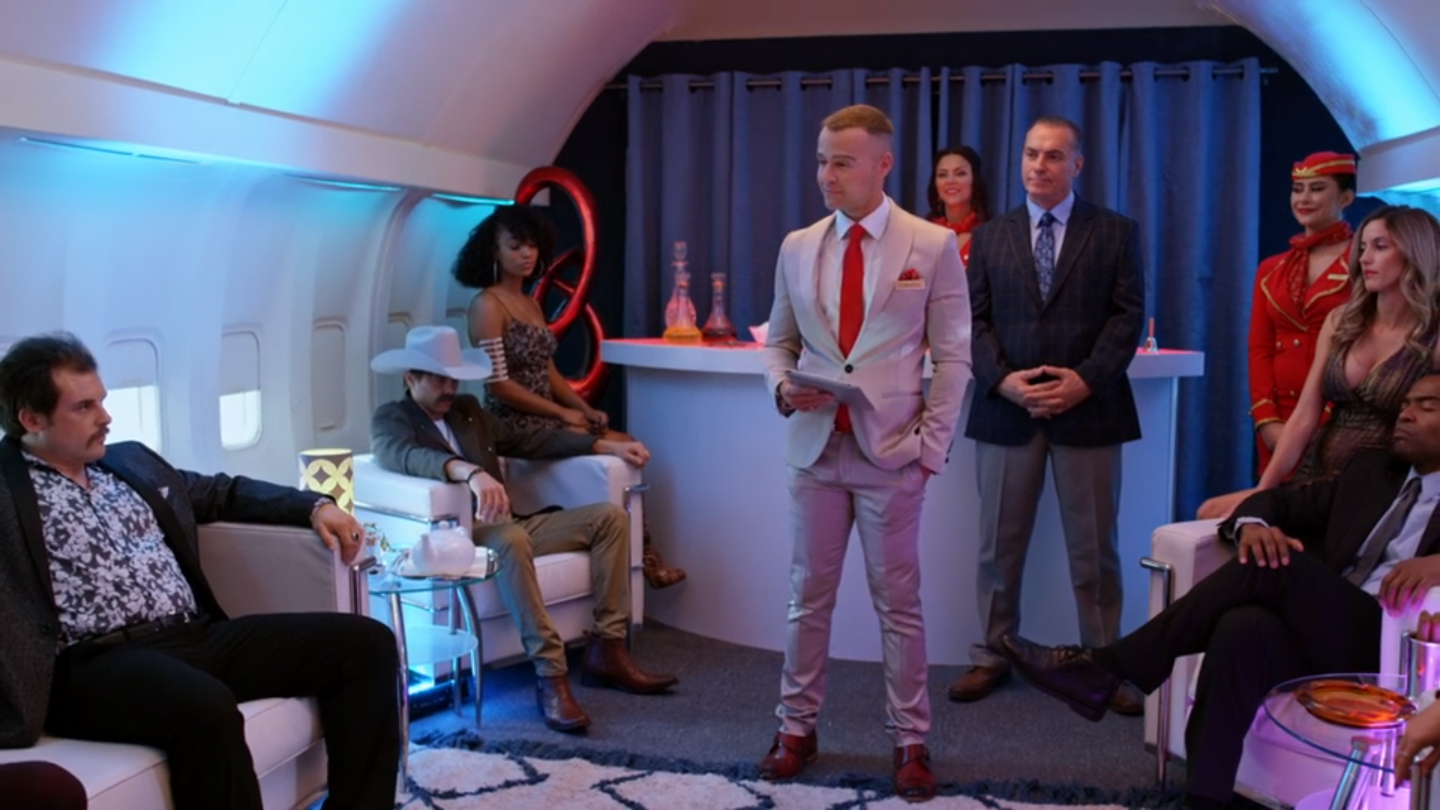 All aboard, the Money Plane! Imagine, a high stakes casino and underground gambling circuit that caters to the world’s most notorious criminals and scoundrels, all aboard a giant luxury jet operating over international skies. Sounds pretty ludicrous, doesn’t it? Well, it’s par for the course from a movie led by WWE superstar Adam “Edge” Copeland, a howlingly awful Kelsey Grammer, and…shockingly, all three Lawrence brothers in prominent roles, with one of them having directed and written the script. Money Plane is both as wildly terrible as I kinda hoped it would be, and yet is also less than it could’ve been. The premise isn’t that far off from the 1990s heist flick Money Train (one of those patented Snipes/Harrelson collabos), mixed with a dollop of Con Air. So the potential for fun is there, it’s just rarely realized. And admittedly, within the first five minutes I had nearly peed my pants at some of the atrocious dialogue spouted by Kelsey Grammer’s character, an art connoisseur and crime lord known simply as “The Rumble.” Yeah. That’s his name.

Grammer, who has somehow made the leap from astute purveyor of advice Frasier Crane to playing a poor man’s R. Lee Ermey, never met a line he can’t chew up tougher than a $2 steak. The Rumble is a man who won’t be trifled with, y’see? He’s got one over on criminal/family man Jack Reese (Copeland) after an art theft goes bellyup. The Rumble really wanted that painting, of a duck, mind you, but since Jack and his team failed he now wants compensation. Since he now owns Jack’s massive debt, he feels he can threaten the man at will…

“Warhol, de Kooning, Pollack. Buncha bitches. How about I just blow your brains out? I’ll create my own Pollack.”

But no, it’s better to make use of Jack’s skills. Y’know, the guy who just failed. So instead, The Rumble gives him another chance to repay what is owed. First, a bedtime story…

“There is a legend in the underworld, for those in the know. It’s called a money plane. Some of the baddest muthafuckas on the planet are on that plane all craving for action. You want to bet on a dude fucking an alligator? Money plane.”

Sadly, there are no dudes fucking alligators in this movie, but if the thought of it gave us that line for the rest of time, it’s worth the momentary disappointment.  Jack’s tasked with breaking aboard this legendary vessel, securing $1B in cryptocurrency, and keeping anything that’s in the vault. It’s better to not think about the viability of an actual money plane that operates totally off the grid, but somehow has its tentacles so deep it can arrange literally any kind of wager anywhere at any time. How long will it take for a man bitten by a snake to die from the poison? Well shit, just bet on it. Can’t get that kind of action at the Vegas sportsbook. Bet on a game of Russian Roulette with the phoniest-looking cowboy (played by Matthew Lawrence) this side of the Village People? Sure, why not?

There’s a lot going on inside the money plane, too, and yet somehow very little of it as as fun as promised. Jack, played by an Edge so sleepy it’s like he still hasn’t recovered from Randy Orton kicking him in the head, has assembled his team everywhere they need to be. His right-hand man Trey (Patrick Lamont Jr.) is the tech guy on the inside, while secret weapon Isabella (Katrina Norman, actually a standout here) is a lethal force hiding in plain sight, barely keeping the grubby mitts of degenerates off of her ass. On the ground manning comms is Iggy (played by writer/director Andrew Lawrence). And Jack even has his old military pal, Harry (Thomas Jane, in a role that doesn’t give him enough to do) watching his back, and looking over his family who could be harmed if this heist goes bad. Speaking of which, Denise Richards is top-billed here but she has about two more minutes in this movie than I do, and maybe one more line of dialogue. She has a better smile than me, though.

There are rare moments when Money Plane is as over-the-top as we’d like it to be, but the premise is never capitalized on as it should be. Ignoring that I didn’t get my wish to see Edge spear someone from 30,000 feet in the air like he did Jeff Hardy…

…the money plane turns out to be pretty tame other than the occasional act of random violence.  Maybe it’s my fault for expecting sharks with freakin’ laser beams attached to their heads, but excuse me for thinking that a movie called Money Plane would be pretty insane. There are some decent fights, mostly by Isabella who can be as gruesome as she is sexy. One might think Copeland, with his WWE background, would be spearheading the action but he spends most of his time sitting in a cockpit and trying to stay awake. The same goes for Thomas Jane, whose most exciting moments come from piloting a drone. And if you’re wondering where the biggest bro of all Joey Lawrence is, he plays the money plane concierge, which is a bit like the concierge at The Continental Hotel in John Wick; just as deadly but not quite as cool.

Money Plane is indeed bizarre, but not in the way we want it. While the hokey dialogue and worse acting are part of its B-movie charm, the misuse of its stars and the lack of action is terminal. Perhaps my expectations had been allowed to soar too high for a film that has just a single good idea, that of a money plane, but then never comes up with ways to keep something like that in the air.