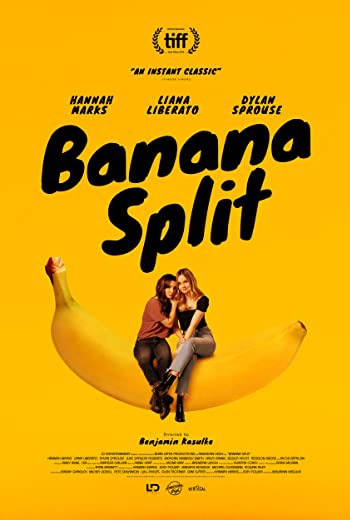 Cinematographer Benjamin Kasulke partners with his Sundance Institute filmmaking lab colleague Hannah Marks for his first feature, Banana Split, a high school relationship comedy that attempts to strike a comedic balance between sweetly sentimental and self-consciously sassy. Sharp writing and endearing performances don’t do much to raise this above standard indie fare, however, suggesting a streaming slot or brief theatrical run as the most likely outcome. Nobody needs reminding that the emotional pain of teen breakups sucks worse than probably anything other than a grownup divorce. For April (Marks) and Nick (Dylan Sprouse), it happens almost accidentally during senior year, when they discover they’ve been accepted at universities on opposite sides of the country, leading to a traumatic separation. Although Nick quickly moves on after starting to date Clara (Liana Liberato), a childhood acquaintance of his best friend Ben (Luke Spencer Roberts), April takes it hard, sullenly withdrawing from her mom (Jessica Hecht) and younger sister (Addison Riecke), as well as her high school classmates. Ironically, it’s an unexpected encounter with Clara that snaps her out of her funk when she discovers her vivacious nemesis to be both witty and sympathetic.

The two unexpectedly become fast friends, spending much of their free time together when Clara isn’t hanging out with Nick. That relationship continues to be a frequent sticking point for the girls, particularly because they’ve agreed to conceal their friendship from him, since it would probably just be awkward and all. Ben, loyal to Nick, seems determined to blow their cover, however, despite his growing feelings for April. As the summer draws to a close, this tangle of teen emotions and relationships threatens to terminate enduring friendships unless the four can find a way to share their secrets and settle their differences.

After April finds herself on the outside of a love triangle looking in, she begins to question the validity of her relationship with Nick, but never seems to wonder why she’s defining her self-worth by the standards of her ex-lover. Clara abets her friend's skewed self-esteem by fixating on Nick as well, all the while denying that she’s falling in love with him. In fact, though, the two young women spend way more time together than they do with anyone else.

Clearly, the relationship drama is really all about April and Clara, making their nonstop girl bonding, partying and hanging out around Los Angeles and Venice Beach seem like good fun. But this doesn’t add up to much of a plot, so it takes a major falling out between the pair, who inevitably drag Ben down with them, to really sort out conflicting loyalties.

Marks, who co-scripted with Joey Power, reserves some of the best scenes for herself, but once April begins to wallow in over-emoting regarding anything Nick-related, things get a bit repetitive. Far better are the scenes around the dinner table with her mom and sister, who has a sharp tongue and some surprisingly precocious ideas about intimacy. She’s not shy about liberally sharing them during the evening meal in a nonstop and mostly successful campaign to taunt her sister and aggravate her mother. If sniping shows that siblings really care about one another, then these often-hilarious outbursts are all about the feel-good family vibes.

Power and Marks clearly have a facility with dialogue, and even though many of their plot points may represent standard dramedy material, the two elevate scene after scene with imaginative insults and witty banter among the characters. Kasulke maintains a strong rapport with his cast and, as a result, the performances rarely feel forced, even when things get a bit outrageous, although for a cinematographer-turned-director, he favors a fairly subdued visual style.