There is an endless spectacle of stunning shots in “Sylvie’s Love,” Eugene Ashe’s swooning period melodrama that luxuriates in a breathtakingly classical feel and freewheeling jazzy rhythms. The first one that will engrave itself into your memory—perhaps even break your heart a little with its sheer beauty—is among the movie’s most unforgettable. Here is Tessa Thompson’s willful character Sylvie, an elegant vision by a dazzling ‘60s-style marquee, carrying herself with poise and grace in a regal blue frock right before she runs into the one that got away years ago.

It’s almost as if someone gently whispered “Old Hollywood” into your ear then, sweeping you off your feet, stole you away to the land of Douglas Sirk—or its 21st Century-made counterparts, “Far from Heaven” and “Carol” by Todd Haynes—where the atmosphere is lush, the colors and emotions are heightened, and costumes are dreamy. We realize in that heart-stopping moment that writer/director Ashe is about to give us something comfortingly tender with his sophomore narrative feature, attempting to revitalize a kind of romantic movie they don’t seem to be making all that much anymore. On those grounds alone where John Crowley’s “Brooklyn” recently stood, “Sylvie’s Love” feels downright rebellious, daring to exist with its unapologetic old-fashioned quality at a time when many maddeningly seem to dismiss honest-to-god romances and proud women’s pictures as slight and outdated.

But there is something more that makes Ashe’s amour fou defiant and groundbreaking in its own way. And look no further than the film’s terrific ensemble cast of almost entirely Black and PoC actors to spot it. A movie lacquered in some of the attributes of the Golden Age it might be, but “Sylvie’s Love” is about the very characters the era often disregarded in their output, failing to recognize them as the protagonists of their own stories. Ashe said it best after the Sundance premiere of “Sylvie’s Love” back in January, noting that he was inspired to write his script after looking through old happy photographs of his own family from the 1950s. Seeing how his ancestors carried themselves with love and dignity, he decided to reflect the truth he found in those pictures; an alternate reality not frequently mirrored in cinema about the Black experience, even today. “I wanted to make a film where Black people of the era don’t exist through adversity, but through love,” he said. 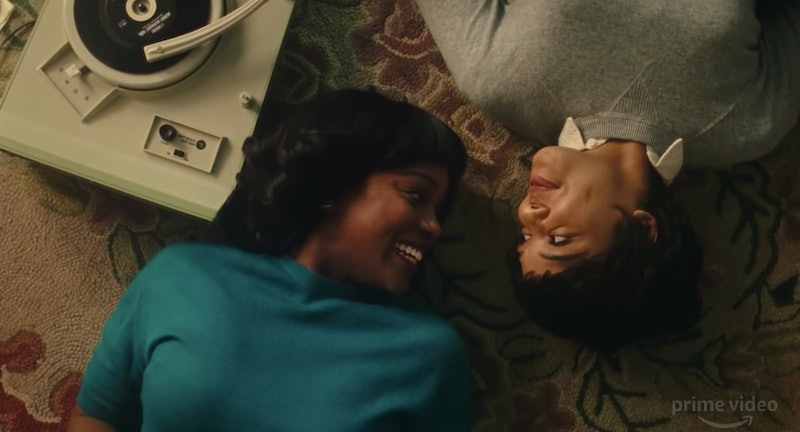 With the on-again, off-again relationship of the willowy and resourceful Sylvie and the ever-charismatic Robert (Nnamdi Asomugha)—her aforementioned long-lost love—Ashe does exactly that. He creates a slice of late-‘50s and early-‘60s where the era’s racism, stirring Civil Rights beats and empowering Women’s Liberation Movement obviously and visibly exist—our ahead-of-her-time Sylvie does read Betty Friedan’s The Feminine Mystique in one scene after all—but the struggles they bring along are decidedly not the story’s main focus. Instead, Ashe keeps his lens tight on the normalcy of the epoch’s everyday life, a luxury that’s formerly been almost exclusively afforded to white-centric stories of the period.

We meet Sylvie in the New York of late ‘50s as an idealist young woman working at her dad’s record store, waiting for her well-heeled fiancé Lacy’s return from the war and spending her spare time lounging around with her spirited best friend Mona. Then comes along the handsome and intriguing saxophone player Robert one summer. He takes a part-time job at the shop, building a fiery friendship with Sylvie that predictably turns into love over accidental dates and nighttime embraces on smoky cobblestone streets, which cinematographer Declan Quinn’s textured lens beautifully captures on 16mm film. But the couple’s lives take erratic turns all the same, with Robert’s music career taking off beyond his wildest dreams (a deliciously hammy Jemima Kirke plays his glamorously powerful manager) and Sylvie’s unplanned pregnancy forcing her to get back with Lacy, who decently agrees to raise Sylvie’s child. (Of course in true melodrama fashion, Sylvie keeps her pregnancy from Robert in order to avoid jeopardizing his blossoming music career.) Underneath Phoenix Mellow’s rich and varied period costumes of cinched waists, cigarette trousers, full skirts and loafers and Mayne Berke’s eye-popping vintage production design that reportedly fashioned a vintage Harlem in studio lots, Ashe keeps the love story pleasantly conventional. When the duo meet again by the aforesaid marquee, their love swells once more and they pick up where they had left off. Where Ashe goes more adventurous is with Sylvie’s career as a television producer. Alongside Fabrice Lecomte’s sultry original score and classically bebop tunes, we watch the young woman thrive as an assistant to a prominent network producer (notably also a Black woman, played by Ryan Michelle Bathe and juggle the demands of her home life with Lacy with her burgeoning professional path. Once she gets back together with Robert and the rise of Motown curtails Robert’s future as a jazz musician, Ashe also smartly puts the madly-in-love pair’s jobs in competitive tracks, gently inspecting the intersection of love and sacrifice through satisfying and twisty embellishments to the story.

It’s not exactly a spoiler to reveal that this is a love-conquers-all type of a tale. Thanks in part to the undeniable chemistry between Thompson and Asomugha and their gorgeously refined performances, even the saddest development here is countered by an undercurrent of comfort that signals how everything will be fine in the end. But the low-stakes nature of “Sylvie’s Love,” which charges the lives of people we’re more used to seeing in high-stakes situations, is exactly what makes Ashe’s film a risky gamble. Its winsome disposition feels radical, maybe even quietly revolutionary.