Josh Duhamel stars in his directorial debut about a group of friends who engage in a raucous competition for a big cash prize.

You can't say that Buddy Games doesn't immediately let you know what you're in for. Within the first few minutes, we see a man's testicles being ripped to shreds by a paintball burst. That turns out to be one of the relatively tasteful moments in the film. 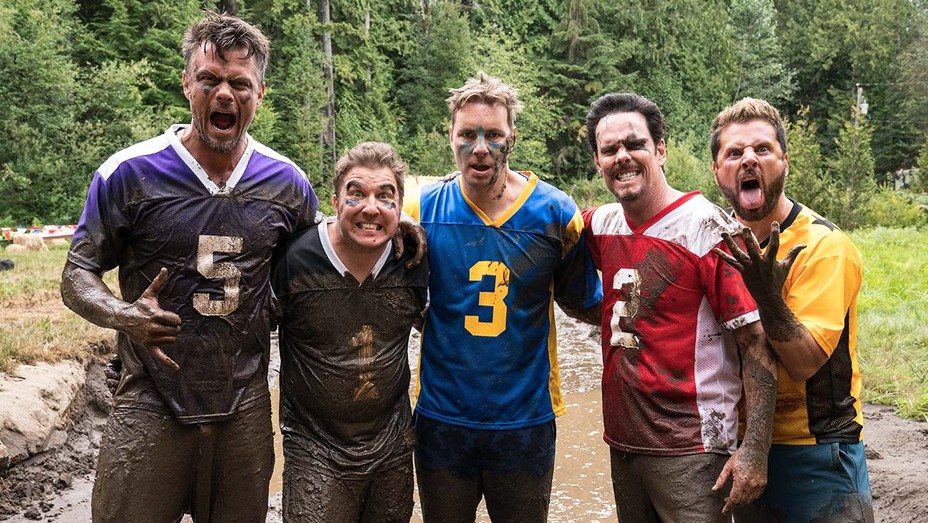 Josh Duhamel, an actor who projects likability, makes his directorial debut with this comedy, which he also co-scripted and stars in. In the film's press notes, he informs us that he's always wanted to direct, and that writing a screenplay seemed the natural way to start. The problem is that he seemed to think the best way was studying all of the Jackass and Hangover movies, along with the 2018 comedy Tag, and taking the worst elements from each of them. The result is yet another paean to arrested male adolescence that should be mandatory viewing in convents to prevent nuns from thinking of renouncing their vows of celibacy.

Duhamel plays Bob, aka "The Bobfather," who conducts the titular exercises for his equally immature friends. The story begins with the unfortunate incident described above, perpetrated on Shelly (Dan Bakkedahl) by one of the players. Cut to five years later, when Bob has a beautiful girlfriend (Olivia Munn, criminally wasted) with whom he trades lewd double entendres in front of his elderly parents. He's also quite rich, which enables him to restart the buddy games at the behest of Shelly's mother, who thinks it's the only way to lift her son out of his suicidal depression.

When the other members prove reluctant to go along, Bob throws in a $150,000 prize as an enticement. To dissuade the group's most disliked member, Bender (Nick Swardson), from joining in, Bob tells him that there's a substantial entry fee, which the destitute Bender scrounges up by performing sexual services on a senior citizen and selling $5 vodka shots from his car.

Eventually the group, which also includes Doc (Kevin Dillon, who must be longing for the relative maturity of Entourage), Zane (James Roday Rodriguez) and Durfy (Dax Shepard) — what, no Dopey, Sneezy or Grumpy? — reunite for a new round of games, which include such not so hilarious exercises as attaching steaks to their heads and confronting a giant lizard. The most extended segment, for which the film should pay royalties to the creators of Bridesmaids, involves the men ingesting laxatives at a crowded bar and trying to persuade women to buy them a drink before the drugs take effect. It's no spoiler to reveal that not all of them succeed.

There's nary a laugh to be found amid the raunchy and often violent hijinks, and the characters are all either thoroughly obnoxious or barely defined. This wouldn't matter so much if the games themselves had any comic originality, but Duhamel and his two co-screenwriters (yes, it took three to concoct this) seem to have fully exhausted themselves with the testicle gag. Or maybe the one involving pina coladas dosed with semen.

To say that the actors, some of whom have done fine comic work in the past, don't distinguish themselves here is an understatement. Although it must be said that Bakkedahl, so hilarious in such smartly written television comedies as Veep and Life in Pieces, delivers an undeniably vanity-free, no-holds-barred performance, even if you come away wishing he hadn't.

The film includes the requisite outtakes during the end credits, as if to prove that the cast members, at least, had a great time. It's too bad they had to do it at our expense.