The Gist: The first Rogue Warfare saw an unlikely team of military heroes from all over the world assemble to take down an underground terrorist network. If you’re looking for more of the same low-budget military action, the sequel, Rogue Warfare: The Hunt, has you covered. When their leader Daniel (Will Yun Lee) is captured by terrorists, the President of the United States orders this team of elite soldiers to once again infiltrate enemy lines to rescue him before he’s tortured to death.

The flick wastes no time getting to the action, depicting the team of American, Russian, British, Chinese, and French operatives ambushing an enemy camp. They find out a “Supreme Leader” is responsible for Daniel’s capture and head in that direction, battling each other’s ways of doing things and moral compasses along the way. The rest of the flick plays out just about how you’d expect; dispatches to the President, tense exchanges between the Supreme Leader and his cronies, and ambushes on various villages as they search for their leader. This is the kind of movie that needs very little explanation – watching about 30 seconds of the trailer tells you everything you need to know.

What Movies Will It Remind You Of?: I suppose if you wanted to compare it to anything, you could say it’s like watching a gun-loving film student’s attempt at their own version of 13 Hours. (Which actually kind of makes sense – director Mike Gunther is also a stuntman and second unit director who has worked with Michael Bay). The influences of Gunther’s former coworkers is pretty obvious, but he never quite hits the mark.

Performance Worth Watching: Perhaps through no real fault of the actors, there aren’t any performances that are particularly worth watching here. The material doesn’t give anyone the chance to shine. The stoic, husky-voiced Commander Brisco (Chris Mulkey) is perhaps the least cringe-inducing of the gang.

Memorable Dialogue: Dialogue is not this movie’s strong suit (what is?), but you have to laugh at just how cliched and stilted each of the lines truly are. We’ve got hits like “You stand with me, or against me”, “take the shot”, and varying hostile exchanges about the corruption of “The West”. A personal favorite is the conclusion of the President’s phone call order to a commander early in the film: “Bring our man home. God knows what he’s been through.” That’s about as good as the dialogue in Rogue Warfare: The Hunt gets.

Single Best Shot: The best shot of Rogue Warfare: The Hunt comes at the end of the film, as two of our leads, having succeeded in their mission, share a moment of levity and look out at the sunset.

Sex and Skin: If you’re here for sexytime, you may want to move along. Aside from some occasional (maybe accidental?) flirting between team members, there’s not anything here.

Our Take: Oh, boy. There is no shortage of terrible low-budget war movies, and Rogue Warfare: The Hunt certainly earns its place among their ranks. From chaotically-filmed action sequences and shoddy sets to painfully awkward performances and noticeably inaccurate costumes (even for me, someone who knows little to nothing about this stuff), the list of things wrong with this movie goes on and on. The “terrorists” only perpetuate harmful stereotypes and may as well be wearing ski masks and Old Navy cargo pants, and much of the shoot-out sequences boast the quality of a shoddily-designed video game. (There are a few moments with VFX blood splatter that caused me to laugh out loud, but unfortunately for the filmmakers, this is not the kind of movie that should elicit any laughter, intentional or otherwise.)

To the flick’s credit, the team of operatives is certainly more diverse than most in this genre. A female assassin? Cool. Sure. #Progress. That’s about where my compliments for this flick end. I get that there is an audience for this kind of thing; when you run out of quality extraction mission military movies to watch, you have to turn to the low-brow stuff. And this just about hits that mark, but even for diehard fans of the genre, it may be a tough watch. It’s difficult to feel any real sense of suspense because we know how it’s going to end, and even if this may seem like your jam, you may still find yourself rolling your eyes at large parts of it.

Our Call: SKIP IT. Rogue Warfare: The Hunt may as well be a Hallmark Original War Movie; with a weak script, poor performances, and antiquated, racist depictions of the Middle East, it’s difficult not to emerge from this viewing experience wanting that hour and forty-three minutes of your life back. If you want a high stakes military op flick, there are plenty of better offerings on Netflix and beyond. 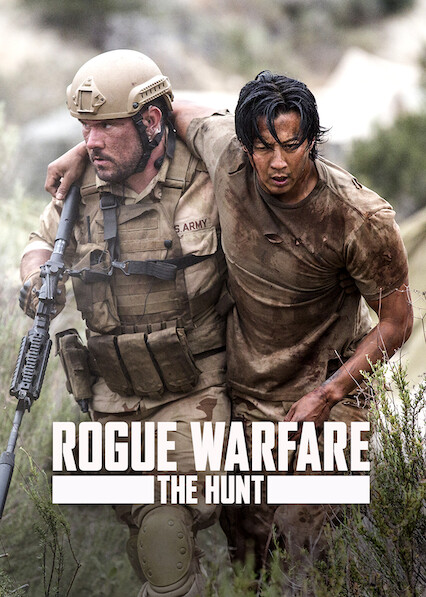