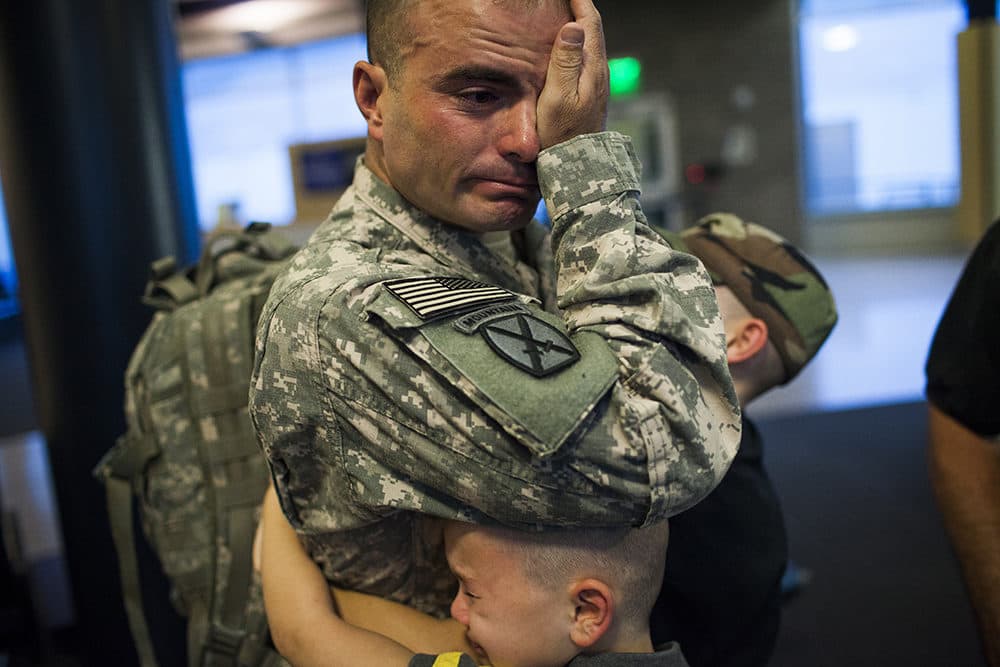 Brian Eisch is at a Renaissance Faire with his family, walking on his still-new prosthetic leg and wearing a baseball cap that identifies him as a combat-wounded, Purple Heart-awarded veteran. A man he does not know comes over to ask him a question, the question we would most likely be too polite or respectful to ask: "Was it worth it?"

Brian does not hesitate. He says it was. But this documentary, made over the course of a decade, is not so certain, and it keeps that question at the center of the story, as we live through ten years in the life of Eisch and his sons, Isaac and Joey. Directors Leslye Davis and Catrin Einhorn present the film in an intimate, unobtrusive, understated style. They have the luxury of time so everyone on screen is completely relaxed and open, seemingly forgetting the cameras are there. Spending years with the family gives the story additional scope and depth.

The film opens with a statement from then-President Obama, announcing his decision to send more troops to Afghanistan and acknowledging the almost-unthinkable burden it places on the families of those who are put in mortal danger. Isaac (then age 12) and Joey (7) tell us that they understand why their father must fight. "If he doesn't do this, we'll have bullets flying over our heads at night." But Isaac admits that when his father is away, he feels like he has a 25-pound weight on his shoulders.

Brian is a single dad. The boys' mother is no longer a part of their lives. "It is a lot easier being a platoon sergeant than raising two kids by yourself ... I question myself every day if I am doing the right thing for my kids." He says that his most important goal is to stay the "fun dad," not come back changed. He is proud of not getting half the security deposit back because of the damage inflicted by the indoor squirt gun fights he had with his sons and promises when he gets back they will have all kinds of fun.

But then there's the moment Brian remembers only as "snap, snap, burn, chainsaw." His leg is badly injured, and the next time he sees the boys it is in Walter Reed National Military Medical Center. The fun dad is now shaken, in terrible pain, and being pushed in a wheelchair by his son.

Over the next decade we see the family experience love and loss as Brian struggles to find purpose and identity. It was not really his choice to enlist. "My dad wanted one of his kids in the military. I was the last one so it was me by default." But in the military, he always knew who he was and what he was doing. He was a part of something bigger than himself and he was protecting his family and his country. It was, for him, the very definition of being a man. He felt strong and powerful. At home, in pain, unable to stay in shape, he spends all day revisiting his time in Afghanistan by blowing stuff up in video games. The quiet, observational camera, after years with the family barely noticed by them, invites us to consider Brian's ideas about masculinity and how they influence the sons he wants to be "tough little s--ts." More than once, we hear him tell his sons not to cry, one just minutes after birth.

The t-shirts the family wears in the film act as guide and commentary, another performative layer of masculine bravado: Green Bay Packers, Army, and a shortly-after-injury shirt Brian wears that says "What doesn't kill you makes you stronger, except for infantry—infantry will kill you." Isaac's shirt says, "Hold my trophy while I kiss your girlfriend." Later there is a camo infant's onesie. Will the parents choose "Drool sergeant" or "Commando of the playground?" "He's angry," Brian's wife tells us. "He doesn't feel masculine." Brian sees on the news that "bad guys have taken over" the area he used to patrol. So, he not only misses what he "used to could;" he questions whether he ever did.

Is pushing Isaac to go into the military Brian's live-action version of war by proxy? Or a new kind of "could?" The title is apt, with the word "soldier" either separating or connecting "father" and "son." Which is it? Davis and Einhorn let us make up our own minds about Brian's view of masculinity, and by doing so, they encourage us to challenge our own.