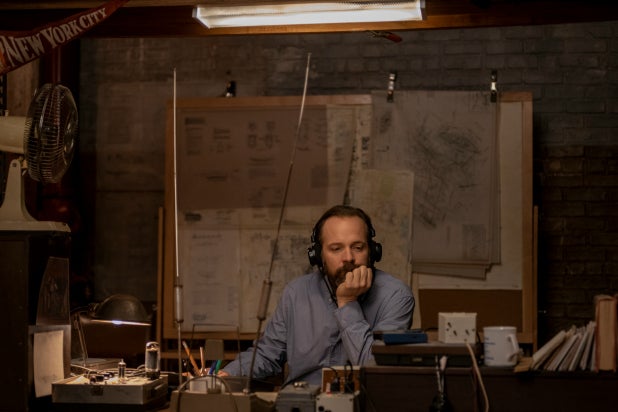 While it seems right up there with other flimsy 21st-century career paths like social media influencer, Instagram model or branding consultant, not long into The Sound of Silence you will believe that "house tuner" is a legitimate profession. An ideally cast Peter Sarsgaard plays one such specialist, ironing out the discordant sonic kinks that cause depression, anxiety or stress in the homes of people living in that most cacophonous of cities, New York. Debuting feature director Michael Tyburski and co-writer Ben Nabors' lyrical character study, expanded from their 2013 Sundance award-winning short Palimpsest, deftly balances the cerebral with the soulful in a story of transfixing originality.

There are echoes of the work of Michael Almereyda here in the coolly intellectual approach, graced with roiling emotional undercurrents and sly humor. The intriguing mood in particular recalls his recent features Marjorie Prime and Experimenter, the latter also starring Sarsgaard.

The actor here plays Peter Lucian, a preternaturally chill, soft-spoken science geek permanently outfitted in tweed, who has parlayed his academic background in classical music theory into an exclusive niche in the ultra-competitive Manhattan job market. His unique field evolved out of awareness of what used to be called noise pollution, taken in a precision-tooled direction based on every New York City corner having its own defining tone. Central Park, for instance, is a solid G Major, the serene, idyllic sound of nostalgia. Watching Peter wield his satchel full of tuning forks and hammers in various neighborhoods, we get a picture of a man contented to be consumed by his work.

As shown in his introductory session with depressed, chronically tired Ohio transplant Ellen (Rashida Jones), Peter meets with new clients outside their home, so as to avoid any impediment caused by the key relationship between subject and environment. He then does a room-by-room analysis, testing things like faucets, household appliances and electrical outlets against the noise filtering in from outside until he finds the dissonance that's disrupting the client's peace of mind.

Ellen remains somewhat skeptical at first, but her Brooklyn hipster friends (Tracee Chimo and Alex Karpovsky, deliciously underplaying the satire) swear Peter's the real deal — he was the subject of a New Yorker piece titled "The Devil's in the Dischord," after all. They also urge her to try acupuncture, which yields another droll vignette with Kate Lyn Sheil.

As unhappily single Ellen overcomes her reservations and attempts to get closer to the unfailingly pleasant but still somewhat remote Peter, he increases his efforts to gain academic recognition by publishing his paper on "Sound Patterns in the Urban Experience" in the New American Journal of Sound. If that seems like a terribly dry dramatic pursuit for a movie, it is, but it's enlivened by a subtle playful element and surprising intimacy as each scene peels back layers of both Peter and Ellen as complex characters.

He characterizes her apartment as a C Minor, the mundane sound of resignation, which isn't exactly flattering. And when he elaborates on his theories about life being written in patterns dictated by an unseen grid, she starts resisting, her attraction to him suddenly cooling.

At the same time, Peter encounters professional disappointments. His longtime friend, Columbia professor Robert Feinway (stage vet Austin Pendleton, marvelously jovial but slippery), may not be as supportive as he claims to be, while Samuel Diaz (Tony Revolori from The Grand Budapest Hotel), the assistant helping Peter to catalog his data, has his own ambitions to nurture. The sting of academic rejection — felt acutely in a withering encounter with a leading specialist in audio science (Tina Benko) — is coupled with an eye-opening taste of the opportunism of the corporate world.

This is experienced in crisply double-edged scenes that walk a line between seriousness and deadpan humor as a company called Sensory Holdings makes potential overtures toward funding Peter's work. Their reception area console invitation to "Please select an atmosphere while you wait" is a hilarious riff on such therapeutic concepts and sleep aids as whale-call and wave-sound recordings. Sensory Holdings' slickly ingratiating but transparently untrustworthy chief executive Harold Carlyle (Bruce Altman) wants to get Peter involved in selling "bespoke domesticity." Peter makes no secret of his distaste, turning up his nose at the idea of his sacrosanct work being exploited for commerce.

In less assured hands than those of Sarsgaard, Tyburski and Nabors, Peter might have come off as a pretentious purist, too enamored of his own arcane knowledge to fit into the real world. It's that aspect that causes Ellen momentarily to back away. She's lonely but she's also no fool in Jones' smart, sensitive, ever-alert performance, confidently exploring the dramatic range of an actress predominantly known for comedy.

However, there's a haunting melancholy beneath Peter's highfalutin talk that creeps up on you in strange ways. It helps that the filmmakers have given him such credibility as a character, working with neuroscience advisors and art-science mentors to ensure that references to the mechanics of how sound affects the brain hold water.

The dense soundscape that's such a vital presence in the movie, interwoven with Will Bates' score and selections from Bach, Mozart and others, suddenly takes on a more assaultive aspect as Peter hits his low point in scenes that acquire a veiled violence almost akin to that of psychological horror. But the beautiful final scenes, unfolding during a thunderstorm-induced New York power outage, have an almost magical quality of hope and human connection. This is also the most visually interesting section of the otherwise slightly flat-looking movie.

It says something about this minor-key but unexpectedly lovely film's lingering spell that we leave the theater — at least I did — recalibrating our own aural perception process and parsing the sounds around us with new attentiveness.